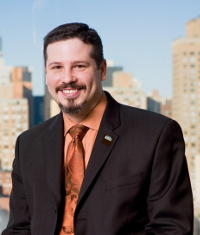 Dr. Joe-Joe McManus is the Executive Director of Rootstrong, a 501(c)3 non-profit organization dedicated to culturally responsive leadership education and development. He is also a Senior Associate with the Kingston Bay Group (www.kingstonbaygroup.com) consulting firm, and serves on the faculty in the Lynch School of Education at Boston College.

The academic and professional goals that Dr. McManus has pursued have been motivated by his personal history. When Joe-Joe was a year old his brother Kacey was adopted, he was five weeks old. A few years later B-J, the youngest brother, was born. Racism became an issue early on for the boys because of reactions to Kacey being an African American child in a European American family. Later issues of anti-Semitism and classism piled on; Mom being Jewish and the family living in an apartment behind a liquor store. There was also a history of Interreligious marriage; Grandpa was Irish Catholic and Grandma English Protestant, on Dad's side.

Nothing was more difficult to cope with than the racism that was directed at Kacey. Teachers were the worst. They placed Kacey in the lowest possible classes, Joe-Joe in the highest. They both knew that wasn’t right. Their parents fought with the teachers, and Kacey and Joe-Joe fought...everyone, it seemed. Over time the prejudice in school, the racism that is everyday America, and the tremendous stresses of being an adolescent, became too much. At the age of seventeen Kacey became a victim of suicide, and Joe-Joe suffered the most profound loss of his young life.

Kacey and Joe-Joe had tried to make a difference, speaking to fellow students, arguing with teachers, taking on anyone that dared make a racist comment. It all seemed in vain. Joe-Joe felt like a failure, unable to protect his younger brother from the pain and injustice.

Years of struggling silently with the loss of his brother followed, constantly fuming over manifestations of racism that continued to go unchecked. Oppression of all sorts became evident, and continued to fuel his rage. Then Joe-Joe began to speak. He spoke at schools with students, trying to work with them to combat racism in themselves and others. He spoke to teachers, tearing apart their Eurocentric curricula and oppressive teaching practices. He found himself speaking to international audiences at universities in Moscow, Kiev, and all over Russia, then at the University of Cambridge, then to a packed hall of military personnel back in the States, then again on campus at the college he was attending. His work eventually caught the attention of mentors who continue to guide him today.

Dr. McManus' experience includes serving as faculty at an HBCU and an international university, curriculum development roles at an Ivy League institution and a non-profit organization, and as a senior university system administrator at the largest urban public university system in the U.S. The first in his family, McManus earned a B.S. in psychology and an M.A. in Multicultural Education, ultimately earning a Ph.D. in Educational Leadership at Florida A&M University (FAMU).

McManus currently serves on the E3: Education Excellence & Equity Advisory Board, and previously served on the Board of Directors of the National Association for Multicultural Education (NAME). N

Notably, McManus served as the founding Executive Director for the Ernesto Malave Leadership Academy at the City University of New York (CUNY) and completed an appointment as a visiting professor at Chancellor College at the University of Malaŵi (2001-02) through the International Foundation for Education and Self-Help (IFESH). He also taught for four years in the College of Education at Florida A&M University where his students dubbed him "Dr. Joe-Joe."